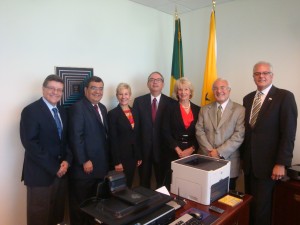 BOCA RATON – The city of Boca Raton is linking arms with the nation of Brazil.

A contingent of Boca citizens and officials visited Miami Tuesday to gather with representatives from the South American country.  The aim is to link local businesses, schools and job creating engines with others in Brazil.

“It was excellent,” City Councilwoman Constance Scott said of the session. “It was wonderful to meet with the ambassador and diplomats.”

Boca already has a major event planned to appeal to the Brazilian population of South Palm Beach and Broward counties. On Sept. 7, the ongoing “Friday Night LIVE” series will celebrate Brazilian Independence Day with a festival in and around Sanborn Square. JM Lexus has been sponsoring the series held the first Friday of each month, promoting the restaurants and shops in downtown Boca and giving residents a chance to enjoy the food, arts and entertainment.

“This event will really be spectacular,” said Councilwoman Scott, who also chairs the city’s Community Redevelopment Agency, which deals with projects in the downtown section of Boca Raton.  In particular, she said she was “very appreciative to Doug [Heizer] for all the meetings and lunches we have had to plan to event.”

Rolling out the welcome mat to the thousands of event-goers on Sept. 7 will be many downtown Boca ambassadors, including Rotary Club of West Boca volunteers who are fluent in Portuguese.  They will be stationed throughout the event at the Downtown Boca Welcome Center conveniently located in the heart of the festivities.

Participating businesses will extend hours with special sidewalk tastings, samplings, trunk shows, dining specials, menu items and discounts and late night “after parties” at area pubs and clubs will be held for exploring and enjoying the destination, from Mizner Park to Royal Palm Place, including the signature collection of shops and boutiques, restaurants and galleries along Palmetto Park Road and Plaza Real South.

Scott also noted that the city, several months ago, decided to seek out a Sister City relationship with a community in Brazil. Officials from that country will work with Boca to “find a community to partner with,” she said.